There’s a general principle in law that marriage automatically invalidates wills made by either party before they get married.

This principle was established by section 18 of the Wills Act 1837, which applies to wills executed before 1 January 1983 and states that “every will made by a man or woman shall be revoked by his or her marriage’ and section 18 of the Wills Act 1987 (substituted by section 18(1) of the Administration of Justice Act 1982, which applies to wills executed after the 1 January 1983 and states that “a Will shall be revoked by the testator’s marriage”.

There are however, exceptions to this general rule. One of them is that if the will is made “in contemplation of marriage”, the marriage will not invalidate the will. In relation to wills made after 1 January 1983, the person making the will must have an expectation of marrying a specific person and an intention that their will should not be invalidated by the marriage. It isn’t enough to simply say you might marry someone in the future: there must be clear intentions at the time you are making your will. 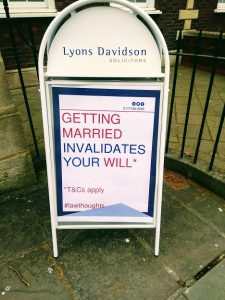 Issues around marriage invalidating a will are being debated in the House of Commons, where the Marriage and Civil Partnership (Consent) Bill 2017-2019 is due to have its second reading this year. The Bill proposes dealing with the issue of predatory marriages (where an individual marries an elderly or vulnerable person for personal and financial gain) by, among other things, changing the rules so that marriage does not automatically revoke a will in every case.

A BBC article published on 21 November 2018 highlighted the case of Joan Blass, who was 91 years old and suffering with vascular dementia when she married a man 24 years younger than her, a year before her death. Joan’s family only learnt of the marriage after she had passed away and, as a consequence of the marriage, the will she had made a couple of years earlier – and importantly before her marriage – was revoked and her new husband had control over her entire estate. This case highlights the importance of keeping your will under careful review and ensuring that you are aware of how important life events may affect it.

If you would like more information on any of the issues raised in this article or advice on wills in general, please contact our Private Client team, who will be happy to help.

Blog Careers Employment News
‘‘Fire and Re-hire’’: Injunction prevents Employer from being able to dismiss and re-engage on less favourable terms The High Court in Union of Shop, Distributive and Allied Workers (‘‘USDAW’’) and others v Tesco Stores Limited [2022] EWHC 201 (QB) has granted an injunction preventing Tesco from dismissing employees who refused to withdraw their entitlement to … Continued

Blog News
Bon-voyage- Or maybe not? It’s that time of year when we are in the mindset of seeking some spring sunshine or planning ahead for a summer break. However, most of us have had the unfortunate experience of our flight either being delayed, cancelled or boarding being denied. Would you know what compensation might be available … Continued

Blog Insurance News
Unpacking the Package Holiday You had booked a package holiday and you were looking forward to having a relaxing time, but something went horribly wrong. Now you’re back home and the question is what can I do?   How do I know if I booked a package holiday? If you’re unsure whether your holiday actually … Continued
View all news